TOP > Tradition-culture > Toru Horiguchi’s 5 rules, an energetic craftsman of type of faceted glass from Edo (called Edo-Kiriko) attract attentions from all over the world.

Toru Horiguchi’s 5 rules, an energetic craftsman of type of faceted glass from Edo (called Edo-Kiriko) attract attentions from all over the world.

Toru Horiguchi is an energetic glass craftsman who has been gaining attention from all over the world.

Fancy designs with traditional patterns usually come to mind when we think of Edo-kiriko, but Mr. Horiguchi’s products instead aim for simplicity and minimalism.

Mr. Horiguchi and his work have gained the attention of many, so we wanted to understand the ideas behind them.

[Rule 1] Put the essence of everything I’ve seen and heard into Edo-kiriko. 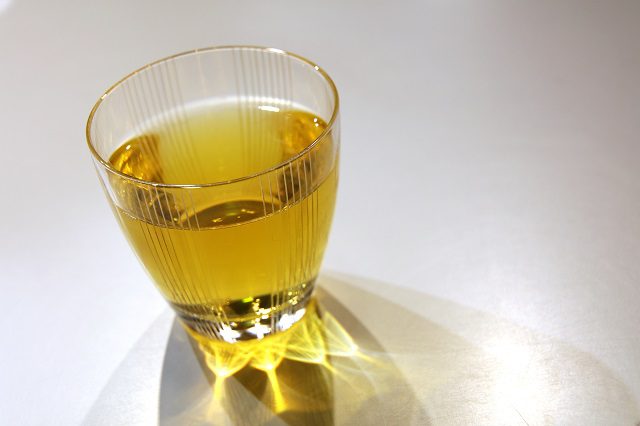 Mr. Horiguchi: I’m not good at making something from nothing. However, I am good at piecing together multiple interesting elements that I stumble across and incorporating them into Edo-kiriko.

For example, they use the phrase “to raise” in pottery industry to describe clay as it is sculpted and baked into its final form. I’ve tried to translate this style into Edo-kiriko. However, glass cannot be manipulated in the same way; chipping Edo-kiriko does not bring it to its final form, but rather destroys it.

Then at least, I thought if I can let my products be supreme state at users. If so, I want make ones unfinished and let them have margin.

The whole process of creating doesn’t end with me; the lighting, shadows, and scenery truly complete my work. I tried to do something like that.

Also, although I still didn’t have answer, I’m thinking if there is any way that to make glass supreme state with condensation. Condensation that drowns Edo-kiriko’s sparkle is huge enemy but restaurant let dishes cool to serve their cuisine with supreme state, then condensation comes up. This is what I have as homework.

[Rule 2] A great painter knows when his work is complete; it’s better to not overdo it.

Mr. Horiguchi: Restaurant “Uemura” in Kobe asked me to design plates to serve snow crab with. I suggested “raising” the plates – adding new details every year until they are “grown up” three years later. 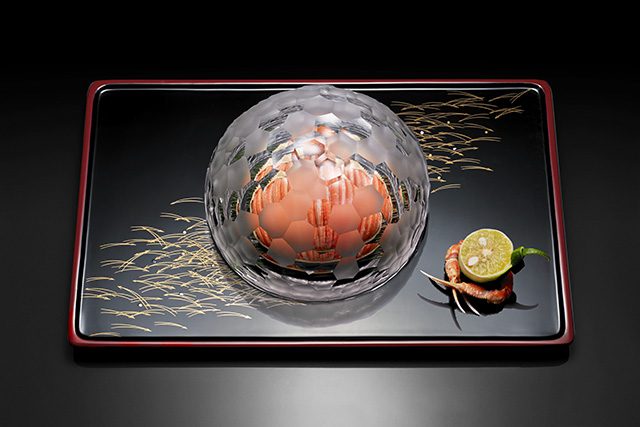 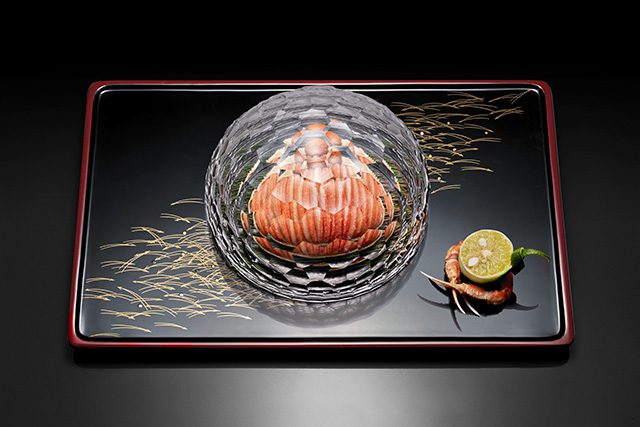 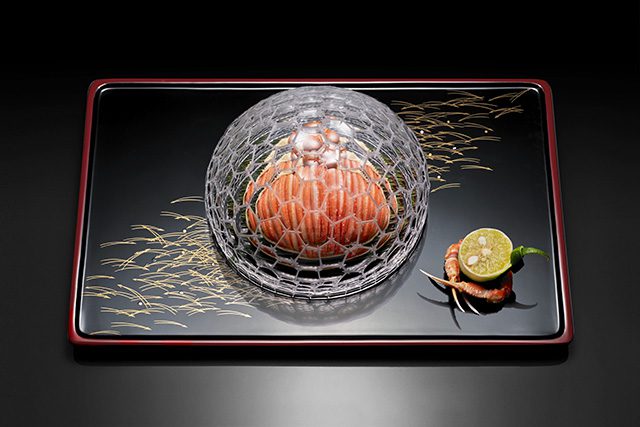 By delaying the final form of these plates, customers were able to enjoy them at they were “raised.”

A great painter knows when his work is complete. The great Kabuki actor Mr. Nakamura once said that “Even though the crowd liked the show, if I don’t know when to quit, the performance may drag on and become dull”.

[Rule 3] Adopt what’s necessary and omit what’s unnecessary. If you need something again, it’s okay to use it! 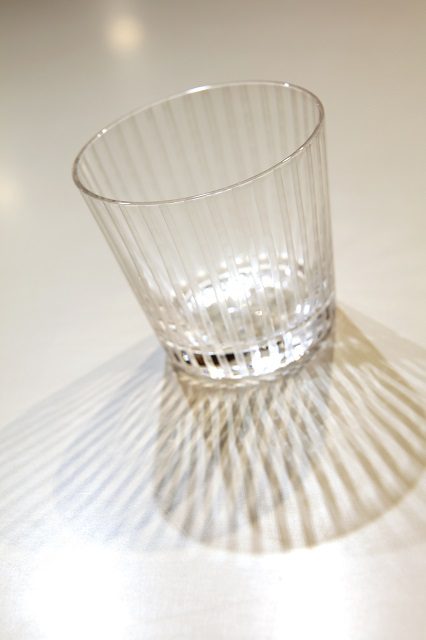 Surely people still want certain products because they were popular in the past. This is how traditional crafts came to be.

But it’s a difficult problem, as everyone has a different idea of what tradition is. There may be different periods for different traditions.

As for Edo-kiriko, there seems to be a big change in style every 30 to 50 years. If we asked someone from this generation what “What is tradition?”, they might answer “that which doesn’t change.” But I think our generation is currently in this transitional phase.

[Rule 4] Real nature does not change with the eras. If something surprises and attracts people, it’s Edo-kiriko. 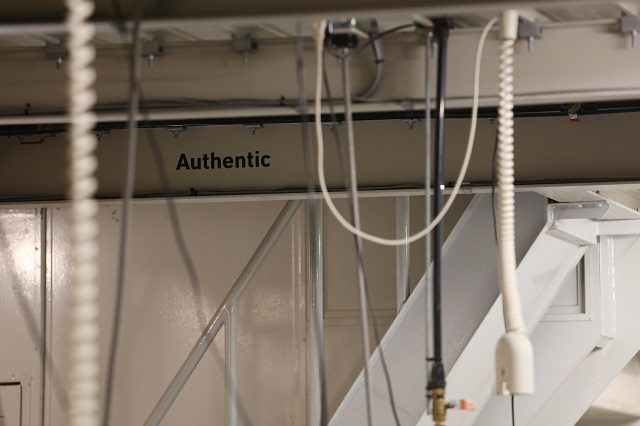 Corporate messages are written on the studio’s beams.

By studying and understanding the history of Edo-kiriko, I’ve realized something. Styles in traditional crafts go in and out of fashion, Edo-kiriko included. If you understand that, it’s okay to not follow the trend. I’ve come to realize that stuff like design, color, and shape are superficial.

On the other hand, something that remains unchanged through the eras is true nature, I think. Edo-kiriko has done just that, surprising and fascinating people across multiple eras. When I’m creating something, if it can surprise and fascinate people, then I believe it’s Edo-kiriko.

This is just a guess, but the older a tradition is, the longer it takes to change. As a tradition matures, the amount of parts that change becomes less and less. And so, the older a history it has, the more likely it will remain unchanged for a long time. It might be a several 100 year cycle before a certain tradition changes again.

Edo-kiriko is less than 200 years old. It’s still in its infancy, so its period to change will be relatively shorter.

[Rule 5] The pursuit of quality is at the core. I was taught to face the glass by my master. 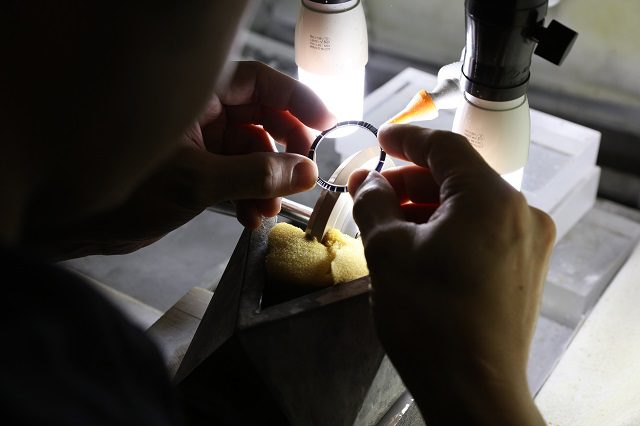 Processing the bezel on a wristwatch created in collaboration with a company.

My mentor was my grandfather’s best apprentice. By the time I had decided to be an Edo-kiriko craftsman, my grandfather had already passed away.

There was a big age different between my mentor and I, so our relationship was like grandfather and grandson; he never scolded me nor denied me.

The one thing I learned from my mentor was how to “face the glass,” observing him as he worked. Of course I learned the techniques too, but more from colleagues and by myself.

I was most impressed with my mentor in his declining years. Being 88 years old, his eyesight was gradually becoming poorer and poorer. Instead of quitting, he continued cutting glass in short, 15 minute intervals while his eyes were properly functioning: 15 minutes after waking up in the morning, and 15 minutes after a nap. Always exactly 15 minutes.

You know, it’s not like he went completely blind after 15 minutes. His eyesight wasn’t that bad, but he strived for quality. Being a craftsman since the age of 12, it must have been hard to constrain himself from working. He would always tell stories of 36-hour work days in his 30’s and 40’s! I wonder if I’ll be the same way at his age.

[Summary]
According to Edo-kiriko cooperative association, the definition of Edo-kiriko is,
1. Made of glass
2. Made by hand
3. Made with rotating tools
4. Made in a specific geographic region
.
Mr. Horiguchi: “It may sound extreme, but if it surprises and fascinates, then it’s Edo-kiriko.”

Some say Mr. Horiguchi’s products do not seem like Edo-kiriko, but I think it’s just the opposite. The nature of his creations contains a sense of sophistication which is certainly that of Edo-kiriko. 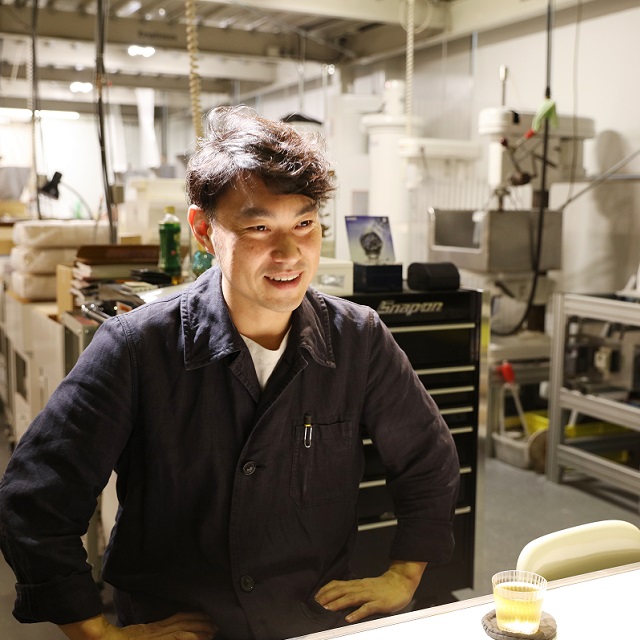