TOP > Tradition-culture > Yasutaka Nakajo, of the third generation of the Daimatsu dyeing factory, explains the present and future of Edo Komon and Edo Sarasa

Yasutaka Nakajo, of the third generation of the Daimatsu dyeing factory, explains the present and future of Edo Komon and Edo Sarasa

Kimono, which were once ordinary wear, now have a high status. However, during the Edo era, Edo Komon and Edo Sarasa were loved by the common people, and their highly individual patterns were very popular.

On this occasion, we interviewed Yasutaka Nakajo, of the third generation of the Daimatsu dyeing factory. He talked to us of the charms of Edo Komon and Edo Sarasa. He also told us about the process of manufacturing Edo Komon, and a new initiative being taken for the present age.

This expresses the playful spirit of the craftsman delighting in the detailed techniques and manufacturing techniques passed down from the Edo era.

First, let’s get the basics！What are “Edo Komon” and “Edo Sarasa”? 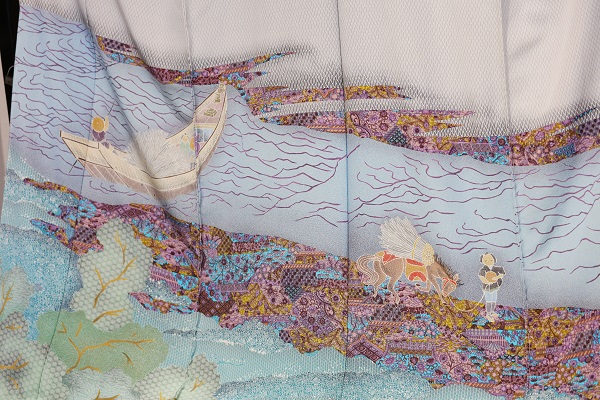 Visiting wear on which “36 views of Mt. Fuji” is depicted using the techniques of Edo Komon and Edo Sarasa.
Product by second generation Ryuichi Nakajo.

【What is Edo Komon?】
With Edo Komon, when you look at it from far away, it appears humble to the point of being plain. However, when you come closer, you can see it is made up of highly individualistic and delicate patterns.

“We can trace the origins of Komon back to the Nara era, but it only began to spread in earnest during the Edo period. This was because Komon dyes came to be used for the “Kamishimo”, the ceremonial dress of the samurai” explains Nakajo-san. Patterns came to be decided based on the Daimyo, such as “Gokusame” for the Kishu Tokugawa house, “Kikubishi” for the Kaga Maeda house, and “Gomagara” for the Saga Nabeshima house.

Finally, Komon began to spread in popularity among the common people, and the patterns became more diversely colored.

Highly individual patterns were produced, ranging from the “Gyogikomon”, with its alternate layout of white dots, “Kujirakomon”, where semi-circles appear to overlap, the vertically-aligned “Kakudoshikomon”, and “Edosanyaku”, the top ranking item in Edo, In addition to this, there is “Kikugasane” with overlapping chrysanthemums, and “Yuishibakomon” like bundled brushwood. Also adding a unique flavor are the “Irohakomon”, which uses the 47-character Japanese “iroha” syllabary as its motif, and the “Koyomikomon”, expressing the calendar table.

【What is Edo Sarasa?】
This is the dyeing craft of “Sarasa”, which originated in India. Patterns depicting plants and flowers, people, and birds and beasts are dyed on cotton and silk using rich colors, known as Gozai (literally the 5 colors), and this is said to have been passed to Japan in the Muromachi era. At this time, only those with special rights or rank, such as the warlords, wealthy merchants, and tea-makers, could get hold of them.

From the middle part of the Edo era, domestically as well, imitating the imported Sarasa goods, “Japanese-style Sarasa”, where the patterns were dyed into cotton came to be made. Then, from the latter part of the Edo era, they spread to the peasant classes, and began to incorporate a novel Japanese feel, and evolving into an original form of Sarasa.

Delicate work in which stencil dyeing is repeated 45 times. This is the process up until Edo Komon is produced. 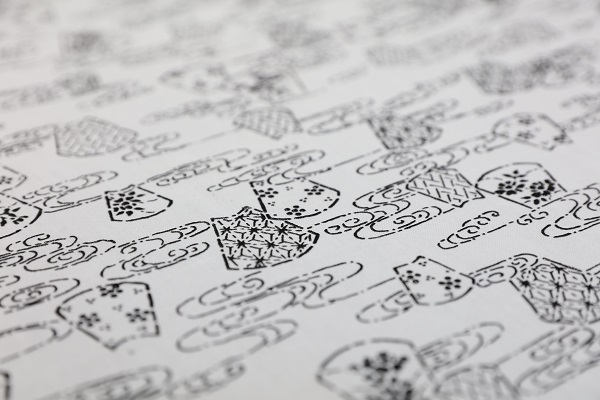 The black section uses an anti-dye glue, which turns white when dyed.
So, how are Edo Komon and Edo Sarasa made? First, I will introduce you to the process for making Edo Komon?

【Manufacturing process of Edo Komon】
1、A “tanmono” (roll of cloth) is attached to a board of approximately 6.5m.
The tanmono for one kimono is approximately 38cm wide and 13m long. Firstly, a plain ”tanmono” is wrapped around a the front and back of a 6.5m board, and fixed with glue. This is attached in a straight way, to avoid any slopes or bends, and the left and right edges are fixed with tape.

The approximate 5mm section fixed with tape is not dyed, and is referred to as the “mimi”(ears). Genuine hand-dyes will have “mimi”. Those without “mimi” are fake products dyed by machinery. However, recently, machine dyeing has also started to make “mimi”.

2、Wet the katagami (pattern) with water 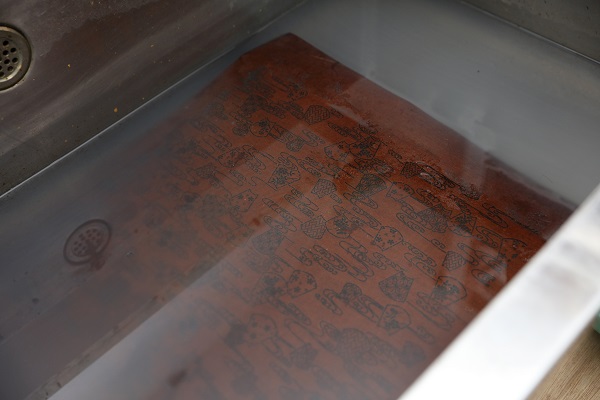 The katagami is wet with water before use.

If used in a dry state, the katgami can tear easily, so wet the paper pattern with water and remove the moisture using newspaper.

The katagami is affixed to the Japanese paper, and a persimmon varnish is applied, to engrave a pattern. This is called Ise katagami, and is made by craftsmen from Ise, in Mie Prefecture. Recently, it has been reported that katagami craftsmen are on the wane, and they are having a problem finding successors for their trade. 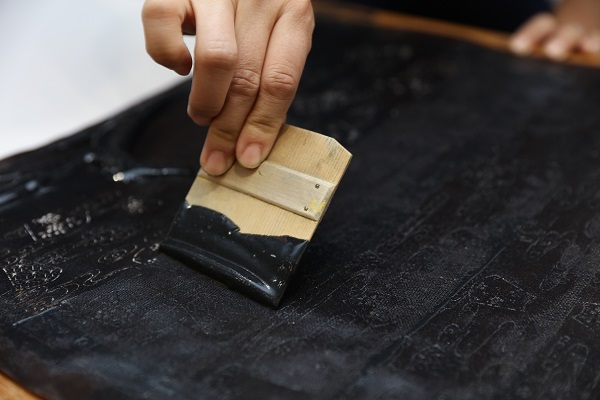 Place the katagami over the cloth, and then apply the anti-dye glue over that with a brush.

The katagami has a vertical length of approximately 30cm and horizontal length of about 38cm. To dye a tanmono of 3m, the stencil dyeing needs to be repeated approximately 45 times. The katagami is placed on the cloth and the anti-dye glue is applied using a spatula. After application is complete, the katagami is peeled off and the same work is repeated with it being placed on the next section to be covered. To make sure there is no misalignment with the previous dyed pattern, placing of the katagami is performed in accordance with “star” marks. 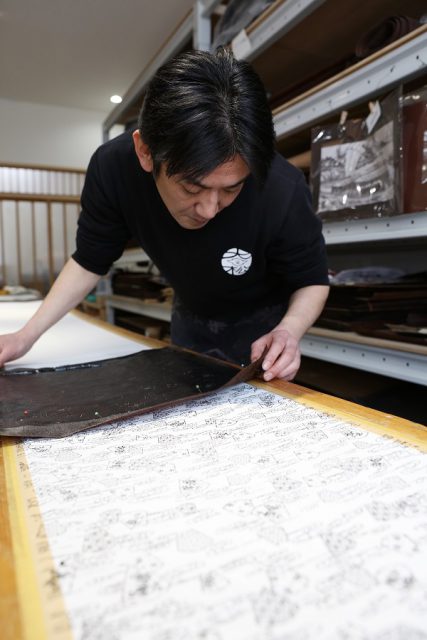 Matching the “stars” to prevent the pattern seams from becoming misaligned.

If it becomes even a little misaligned, its value will fall. Therefore, extremely delicate work with points below 1 mm and patterns that do not shift are required.

However, with Edo Komon there are faint remnants of the seams of the pattern, called “Katatsugi”. This is a way in which you can distinguish the real hand-dyed Edo Komon. When machine-dyed, these “katatsugi” are not produced. It is said that Edo Komon is not up to standard if the “katatsugi” are either not there or, at the other extreme, are prominently noticeable.

Edo Sarasa is also a method of dying using katagami. However, it uses approximately 20 colors and as each of these colors are dyed one by one in the form of a “hanga” (wooden block), the dyeing needs to be repeated once for the number of colors used.

“At our company, we use up to 24 patterns. That is to say, we need to repeatedly dye 24 times for each color. Edo Sarasa has more complex patterns and more colors, and so the work is considered to be harder. However, this means that the “katatsugi” are less evident. The fact is that it is Edo Komon where fine and elaborate patterns are dyed, so it is not possible to gloss over any little defects and a high standard of technology is required” (Nakajo-san).

We carry on because it is enjoyable. When work is fun, people become grounded. 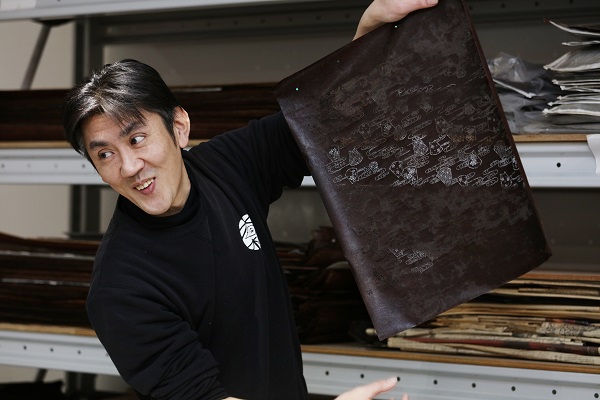 Third generation Yasutaka Nakajo-san, who explained the Edo Komon production process to us.
At Daimatsu dyeing factory, you can go to a trial dyeing room and experience the process of dyeing using the tools actually used by the craftsmen.

Nakajo-san is a third-generation craftsman at the Daimasu dye factory. He was raised watching his second-generation father, Ryuichi Nakajo-san, and naturally followed his footsteps into this world. The second generation was accredited as a “Gendai-no-meiko” (great craftsman of the present age) by the Ministry of Health, Labour, and Welfare, and as a Sumida City-registered intangible cultural asset, being bestowed with the “Ojuhosho” (yellow ribbon) medal.

“Even if it goes on a sideways trajectory, I want to maintain this company that was developed by the second generation. The Japanese textile industry is on the decline, and the number of people who wear kimonos are decreasing. Unfortunately, I have seen many companies in the same industry fall by the wayside.

Despite that, we are receiving a large number of orders. We deal with various materials, such as silk and cotton, and even polyester, and this enables us to respond to a wide range of needs. We have nine craftsmen which makes us very mobile.

We have made innovations like improving the length and height of the work bench in order to make the work easier for young technicians, and enabling the smooth acquisition of the techniques by sticking the katagami on the frame. (Nakajo-san)

The craftsmen working in the Daimatsu dyeing factory are of the young age of between 30 and 38 years old, and there is one woman working there.

“The factory has the heater running the whole year round to allow the dyes to dry faster. For this reason, it can become very hot in the summer. I usually lose about 3kg in the summer. Winter has its own challenges. As we use cold water, your hands can go numb and get rough. It is actually a very hard job.

However, everyone says that “the work is hard, but we enjoy working with Nakajo-san” and I am really grateful for their hard work. I really love this work. I think everyone feels the same about this. It is because we enjoy it that we keep going, however hard it is”（Nakajo-san）. 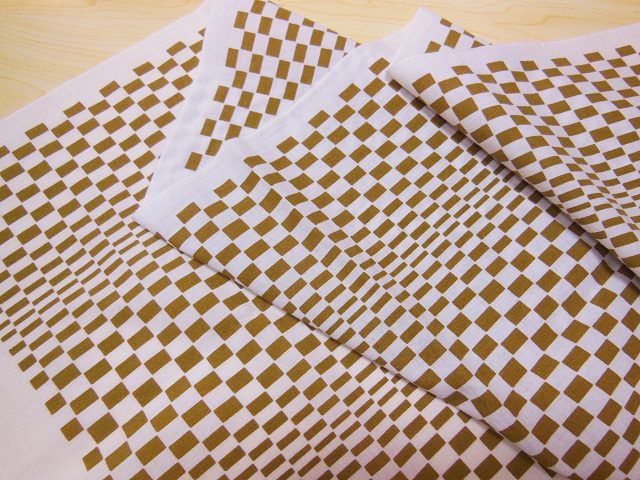 A patent application is currently being filed for the technology of “Kasane dyeing”, in which the front and back of the towel are dyed simultaneously. 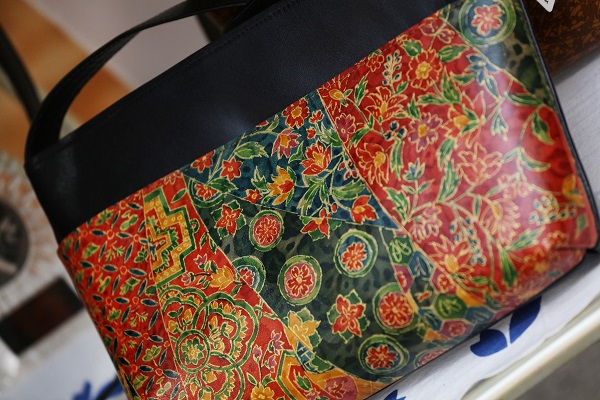 It is because they enjoy their work that it produces new technology and ideas. 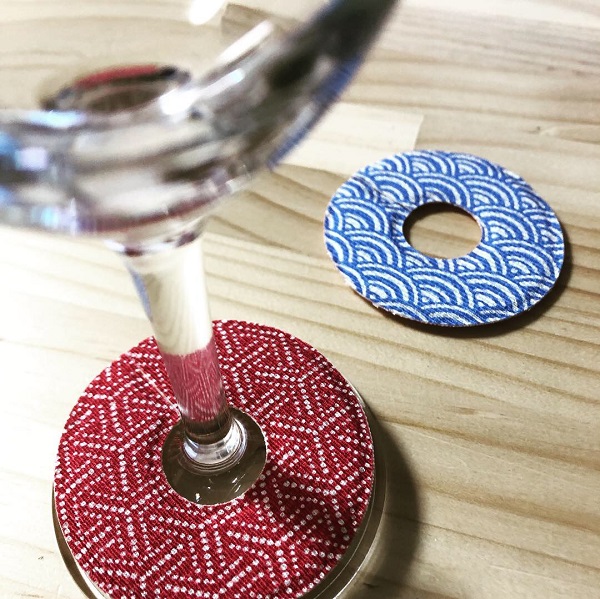 This is an Edo Komon wine glass marker.
As it has a liquid-repellent finish, it is not a problem if wine is spilled on it.

Additionally, Nakajo-san is collaborating with designers, to positively develop new products with a modern feel.

In 2018, he entered the “Tokyo Teshigoto” contest promoted by the Tokyo Metropolitan government and the Tokyo Metropolitan Small and Medium Enterprise Support Center. This is a project in which products are developed by craftsmen and designers in Tokyo, and Nakajo-san, entering with designer Takashi Kubo, developed the wine glass marker using Edo Komon. If you attach this to the base of the glass at home parties where friends gather, you will not need to worry about not knowing whose wine glass it is.

This product was selected as one of 10 products from the total number of 144 entrants whose promotion deserves to be supported.
At the Daimatsu Factory, they not only pass on traditions, but polish the technology, and take on new challenges. Finally, we asked Nakajo-san the following.

――What do you think traditional crafts are?

“When traditional crafts were first mentioned, I was not so sure. It has been 17 years since I entered the family business. I think I started to get a real feel that “this is Edo Komon and this is Edo Sarasa” as I faced the cloth and the glue on a daily basis. I now feel I want to leave this to the next generation and for its popularity to spread” (Nakajo-san). 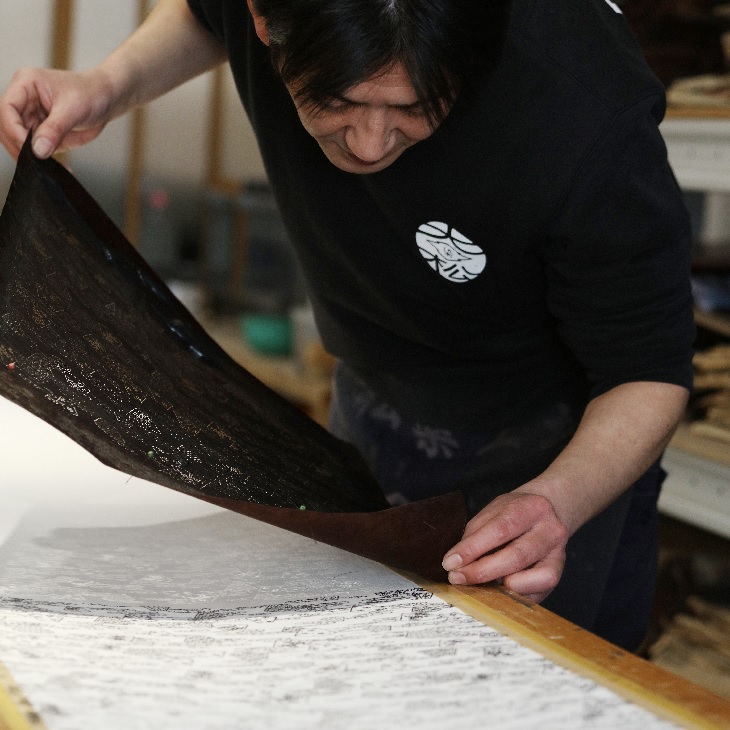