Yobuko, Karatsu, Saga Prefecture. Located 500 m offshore from Yobuko Port, famous for its squid fishing, is the floating small island of Kabeshima in the Genkai sea. This is about 30 minutes by car from the Karatsu city center. Once you cross the beautiful Yobuko bridge, which is shaped like a harp, scenery, such as crop and rice fields, as well as pasture land stretches out before you.F

If you navigate your way through the narrow farm roads that penetrate between them, there is a small factory on the top of low hill. You can hear a sharp clanking sound from within. Peer inside, and you will see two men silently working with hammers.

On the front sign board is written “Mukou Blade Factory”. Those people at work are famous and renowned knife craftsmen, Yoneo Mukou, and his son, Toshiyuki.

The most famous blades and large knives sought out for by the top chefs, at Japanese restaurants and sushi shops with Michelin stars attached, are made at this factory.

After moving to Sakai for training, he became independent and set up home there, after which he moved his family back to Kabeshima Island due to a sense of nostalgia

Knife factory on a low hill on the island of Kabeshima, Karatsu City, Saga.
This day was cloudy. If the weather is fine, you can see a beautiful view of the deep blue Genkai sea and sky.

Yoneo-san, who was born on the Kabeshima island, chose this path at the age of 15. Apparently, he first became a disciple of a master of a field blacksmith in Yobuko. A field blacksmith is a blacksmith who specializes in farming and fishing equipment, and blades for mountains and forestry, 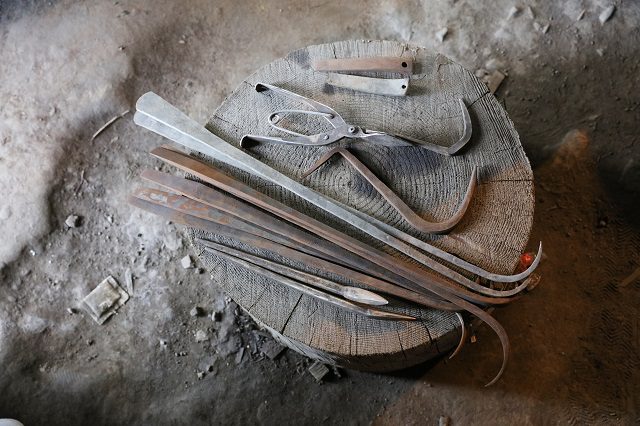 This is a tool used by an “ama” female diver. They also make farming and fishing equipment and blades for mountains and forestry use.

After training for approximately five years, “wishing to polish his skills “, he set out for training in Sakai, Osaka, a center for knife-making , and acquired skills in glost firing. He studied at “Kobayashi Blades”, the home of his wife.

He pursued the skills of glost firing, through repeated trial and effort in between jobs. First, he practiced with oil firing. At that time, it was said, by good fortune, that he came to use for his training the workplace of legendary swordsmith, Masakuni Okishiba, who was said to have completed the first “Mizumoto-yaki” firing. It is said that what he saw and heard there became a hint for how he would complete it.

Incidentally, whereas there was a theory that the word “Masakuni” in “Genkai Masakuni” derives from the name of Masakuni Okishiba, it seems that “Genkai” comes from the Genkai sea where it is located, and “Masakuni” actually comes from the field blacksmith master in Yobuko.

Yoneo-san had a house in Sakai, and bore a son. Toshiyuki was born in Sakai.

However, wishing to return home to his hometown of Kabeshima, Yoneo-san decided to move his whole family there. This was in 1992. Clearing a space on a hill, he established himself as a blacksmith on this island. Since then, they have been making their livelihood here for the last 27 years.

There are only a limited number of craftsmen who can make Mizumoto-yaki blades. 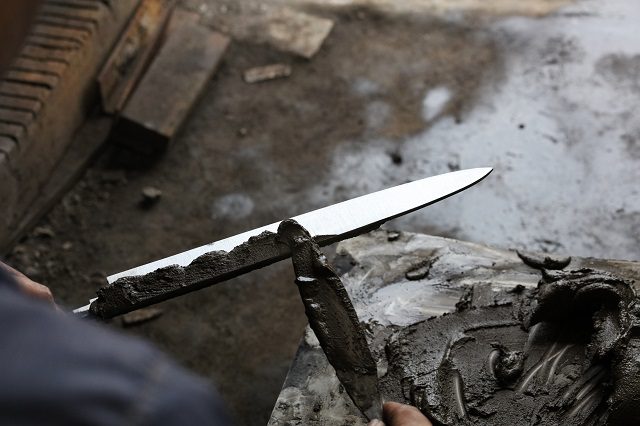 Before quenching, mud is applied to prevent uneven browning. Typical blade crests for Genkai Masakuni are “Fujisan Mangetsu” and “Sanbonsugi”.
Quenching is performed by applying mud thickly to the area that are not to be quenched and thinly for the areas for quenching.

“Mukou Blade Factory” specializes in Mizumoto-yaki blades. Firstly, whereas typically blades involved the welding of soft iron and steel, glost firing is made from one sheet of steel. For this, subtle and advanced technical skills are required.

With quenching, after making the shape of the blade, finally there is the process of heating it in the furnace, after which it is immediately cooled.

Quenching makes the blade hard and sharp. Almost all large knives use a method of oil firing in which oil is used for the cooling process.

Genkai Masakuni, on the other hand, uses water for cooling. This is because water gives a sharper edge. However, as they may crack during production, and the question of how much force to apply is extremely difficult, a high degree of technical skill is asked of the craftsmen. It is an extremely high level of complexity, and that is why there are only a very limited number of crafts
men around the world.

The skill of the expert craftsmen required for making a Mizumoto-Yaki Japanese blade will take your breath away. 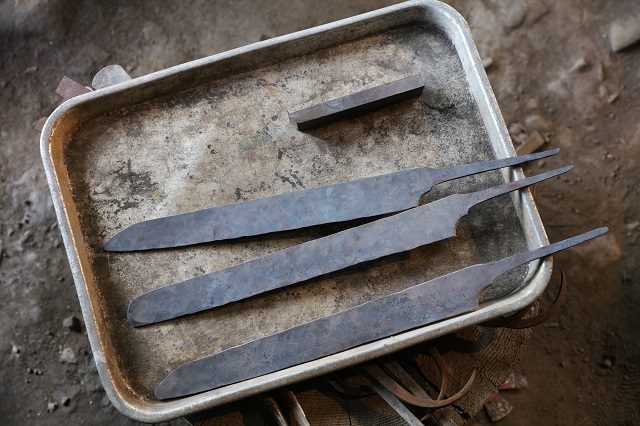 One knife is formed from a single piece of steel. No die cutting or welding is performed.

At the factory, I was shown the process of how they are forged to make the shape. Firstly, a single piece of steel is placed in a furnace that uses pine charcoal and coke as fuel, and it is hit with an electric metal hammer, and hit with heat, to mold the form of the knife. For the steel, Hitachi Metals Yasuki Hagane is used. 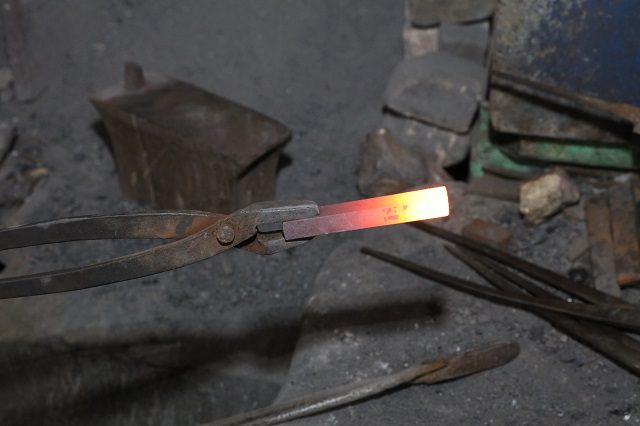 The steel is heated and formed. “If you heat it until it is bright red, it will stretch quickly, but it will be ruined when quenching it.
You need to heat it slowly. You cannot be negligent”, says Yoneo-san.

By repeating the work of heating and hammering, the shape can gradually be formed. I found myself mesmerized by Yoneo-san’s beautiful manipulation of the steel, cheerfully moving along to the hammering sensation and comfortable rhythm.

Hammering with a metal hammer, while heating the steel, to form the shape of the blade. 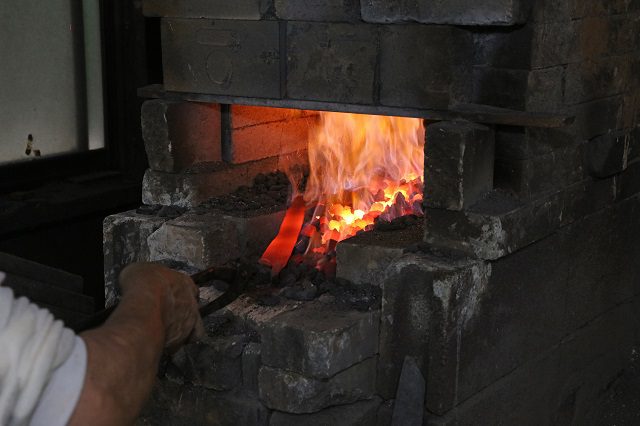 Once it is formed, place in water to cool, and then heat and cool…this is how it is forged. Here, they harden the blade, but as it becomes brittle at the same time, to produce viscosity, they need to bake at low temperatures, and bury in ash to cool gently.

“Even the slightest change in the heat added can cause it to crack or bend. Therefore, to deliver a single item, we forge 2 or 3 at the same time”, says Toshiyuki. That is why it takes time and is expensive.

Yoneo-san cracked open two blades and showed us the cross-sections. The first was very smooth while the other was very rough. This second one could not be used for a product. Due to a misjudgment of the added heat, the particles had became coarse. 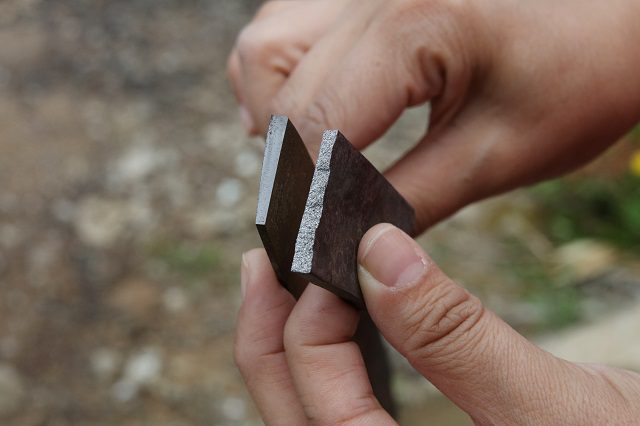 Following that is the work referred to as boasting. The cooled material is hit with a hammer, to more tightly pack the molecules, and increase the sharpness. 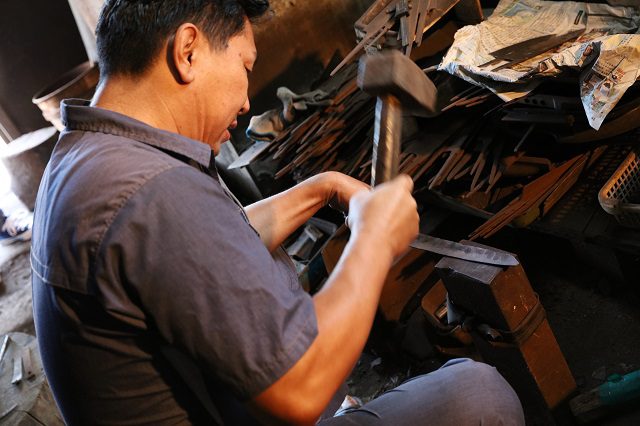 Toshiyuki hammering the blade. The weight of the hammer is approximately 2kg. 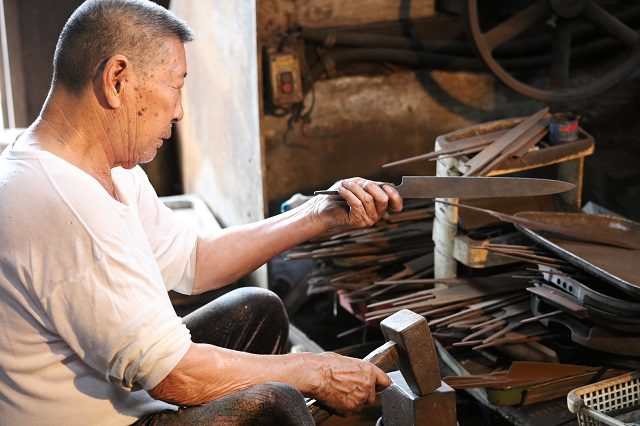 Yoneo-san hammering in the same way. He hammers multiple times while checking and adjusting the warp of the blade.

Following this is the task of sharpening. It is roughly sharpened with a whetstone, and then buff is applied to make it finer. Additionally, the material is fit into a wooden mold, and the main sharpening is performed with the grinder while pouring on large quantities of water, to sharpen the blade, and it is finished into beautiful material by back sharpening and applying “kiken”. 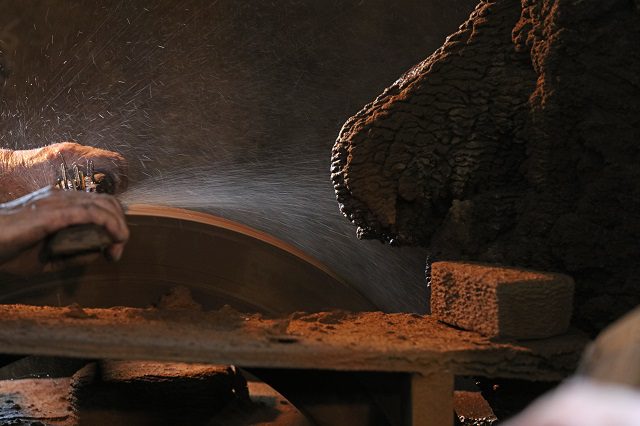 The blade is sharpened while splashing it with large quantities of water to give it a sharp edge.
The front wall looks like a limestone cave, but it is said that it is built up over many years due to the scraped steel sticking to it.

Sakai blades are made by division of labor. As the number of craftsmen diminish, it becomes more difficult to make just one knife. 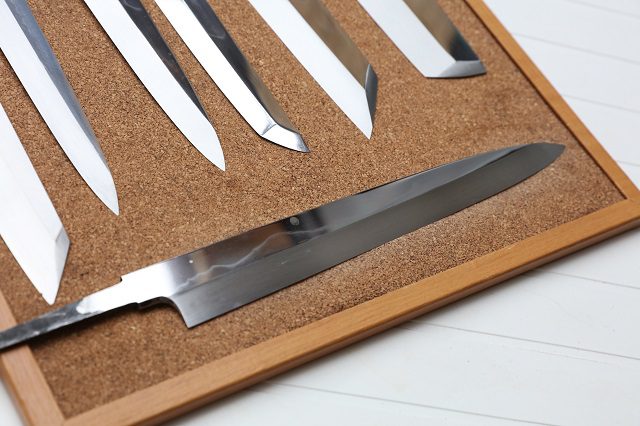 Knives are made through a process of division of labor. The first process is the forging, next is the sharpening, and then finally is the patterning. The Mukou blade factory is in charge of the forging, and ships the forged materials to a wholesaler. The sharpening and patterning is provided by the wholesaler before it is sold. The knife sent to the wholesaler has the name “Genkai Masakuni” inscribed in the section pressed into the handle known as the core. As this is hidden, you cannot tell at first glance that this is a “Genkai Masakuni”. A very small number of blades sold directly by the factory have the mark inscribed on the back of the blade.

For “Genkai Masakuni”, the world’s best blade craftsmen and the polishing and sharpening of Hakuho Minamoto from Sakai was essential. However, regrettably, Hakuho Minamoto passed away in March of this year.

“It is the same as with a comic duo. If one of them is no longer available there is nothing you can do”, says Toshiyuki-san sadly. Unfortunately, craftsmen for forging, as well as sharpening and patterning are on the decline. For this reason, even if the material is created, the product cannot be completed, and it will not be sold.

This blacksmith on this small island is visited by famous chefs, looking for blades, from all over Japan and from abroad as well. However, this work is all done by hand, and sometimes sharpening and patterning cannot be performed. This means that they can rarely be sold.

This is Ken Tsujimoto, third generation owner of “Unagi no makoto” an ancient store in Tokyo, founded 90 years ago, and specializing in “Kabayaki” eel. He loves the Edosaki knives of Genkai Masakuni.

Edosaki is a knife for eels from the Edo era. The way that eels are dressed differ by region, and the knives used by region are called Edosaki, Nagoyasaki, Kyosaki, Osakasaki, and Kyushusaki.

Tsujimoto-san states “Genkai Masakuni has delicate balance that enables it to cut amazingly quietly. More than anything, it really feels like just an extension of your body.” 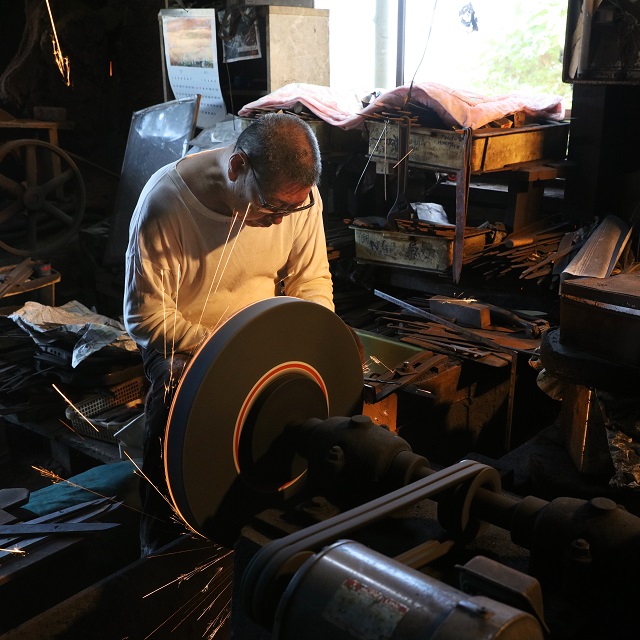